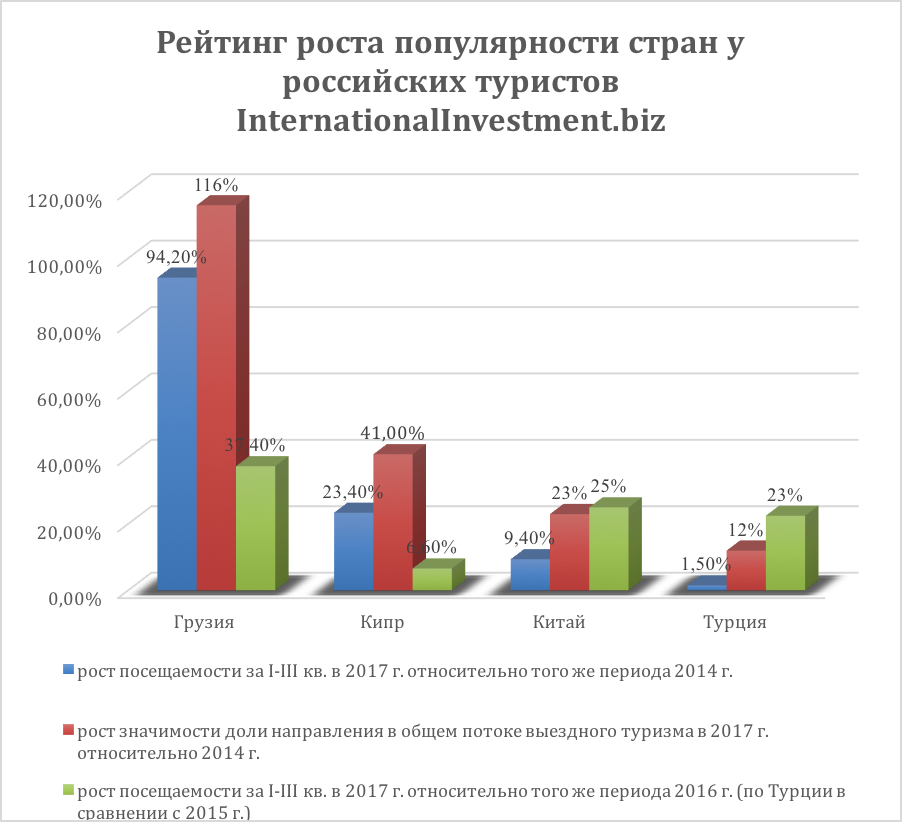 The basis for the rating was the study of the magazine internationalinvestment.biz "Russian outbound tourism 2014-2017: trends and ratings."

The magazine's experts identified four main areas of Russian outbound tourism, which demonstrate stable growth, despite the devaluation of the ruble and a general decline in the purchasing power of Russians.

The rating includes tourist destinations for outbound tourism, showing positive dynamics in January-September 2017, not only in comparison with the same period in 2016, but also with the same period in 2014 - more successful for Russian tourism than 2015 and 2016. This indicator demonstrates the growing popularity of these countries against the backdrop of a decline in the purchasing power of Russian citizens.

For the first nine months of 2017, Russian outbound tourism reached 30,972,000 people. During the same period in 2014, 34,485,000 people traveled from Russia to spend holidays abroad. Thus, the level of outbound tourism in 2017 was 10% lower than in 2014. To participate in the rating were allowed directions that managed to increase the flow of tourists not only in comparison with 2016 but also in comparison with 2014. As an additional factor, the increase in the share of the direction from the total amount of outbound tourism by no less than 0.3% level of statistical error).

The rating includes countries that were included in the TOP-25 since 2014 according to statistics of Rosstat.

Vietnam is excluded from the rating, although its indicators correspond to part of the criteria. But its attendance is largely due to such a change as a closed air service with the resorts of Egypt, and in 2014 it was not included in the TOP-25 most popular destinations. Also, the ranking does not show countries which status is a disputable international character.

In comparison with 2016, Georgia has demonstrated a steady increase in popularity among Russians. The removal of restrictions from the tourist flow to Turkey did not reduce its positions in the list of countries visited by the Russians, but also could not prevent the growth of its popularization. The growth of its popularity among Russians was 34.7% compared to the figures for the first three quarters of 2017 and 2016, while the tourist flow itself, which in the I-III quarters of 2016 was 595 000, increased in number by 207 000 and reached 802 000. 2017, the indicator of the Russian tourist flow to Georgia grew by 94.2% compared to 2014. In 2014, 413,000 Russian tourists visited Georgia. In 2015, this figure did not decrease but increased by 22.5% to 506,000.

If the share of the Georgian direction in 2014 in the total flow of outbound tourism from Russia was 1.2%, then in 2017 it expanded to 2.6%, therefore, the increase in the significance of the share was 116%.

Georgia is the only direction among the popular among the Russians, the indicators by which did not decline in the crisis for outbound tourism 2015 and 2016, but on the contrary grew.

According to internationalinvestment.biz, the growth of Georgia's popularity is not connected with external influence and political factors, but rather the opposite occurs despite them. The tourist attraction of Georgia is growing due to beach tourism in the resorts of Adjara, as well as an excursion, ski, wine and gastronomic tourism.

According to internationalinvestment.biz, a small cause for concern over Cyprus is the prospects after the opening of flights with the resorts of Egypt. However, the difference in the genres of rest in Egypt and Cyprus gives reason to believe that this factor will not significantly affect this. In general, Cyprus has become the standard for Mediterranean leisure for Russians and has every chance to preserve this state of affairs.

Celestial, leading in numerical dimensions of popularity, ranked third with a 9.4% increase in tourist flow in January-September 2017 compared with the same period in 2014.

During this period of 2017, 1,478,000 Russians visited China. A significant part of them were residents of the Siberian and Far Eastern regions of Russia, the closest to China. An essential factor, ensuring the popularity of China, are shopping tours and trips, as well as business trips.

In the group of International Investment, it is believed that China's tourist opportunities are only being studied by Russian tourists and the level of their development is extremely low, which means that it leaves broad prospects for growth in various spheres of tourism.

Turkey, undoubtedly is the leader in terms of tourist flow among the Russians and showed a fantastic growth in attendance in 2017 due to the removal of the relevant restrictions, took only the fourth place in the rating.

The reason for this was its low growth in comparison with the indicators of 2014 - only 1.5%. Also, the incorrectness of its growth rate for the comparative period of the first three quarters of 2016 and 2017, as in this case the growth of the indicator is 816%. But its reasons are not so much in the tourist attraction of Turkey, as in limiting its visits to Russians in 2016, as well as in the current ban on air communication with Egyptian resorts. For these reasons, the second indicator was the rating of the growth of popularity of Turkey in comparison with 2017-2015 (the first three quarters).

That is, the indicator of 2017 returned the position of 2014 and exceeds them by 1.5%. The Turkish side gives several other data for 2016 and 2017, but, according to International Investment, the probable cause of this lies in the difference in counting systems for both the 2017 year itself and in previous years. Russian statistics cannot take into account the arrival of Russians in Turkey, who bypassed the restrictions through transit countries. The decline in the popularity of the Turkish direction was observed all in the same year in 2015 due to the devaluation of the Russian ruble, which painfully hit the Russian people in terms of solvency and their tourist activity.

The share of the Turkish destination in the Russian outbound tourism was 11.3% in 2014. In 2017, this indicator rose to 12.7%. Thus, its growth was 12.4%. The rest of the countries, occupying the first 25 positions in terms of the number of Russian tourists who visited them in January-September 2017, failed to demonstrate indicators that would allow them to be included in this rating. In most cases, the level of their attendance could not recover after a decline in 2015-2016 or did show negative values. Rapidly breaking into the TOP-25 most visited areas of the country did not manage to show a steady growth, and their popularity may be fleeting, caused by external causes.