Forecast: In 2018-2019 the cost of renting housing will decrease, and large developers will increase construction volumes by more than half in Batumi 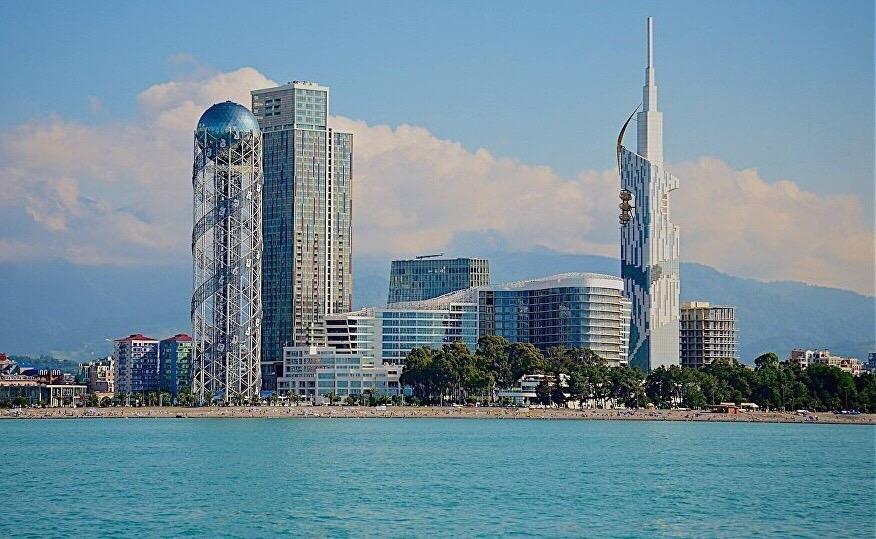 Such conclusions were reached by analysts of the international magazine International Investment, monitoring and research of the real estate market of Batumi (Georgia). Despite the fact that in the second half of 2017 the mayor of Batumi issued fewer construction permits than in the same period in 2016, the total area, which is expected to be built, grew by 101%.

The reason for the reduction in the number of permits issued is the entry into force in 2017 of new regulatory norms for construction in Georgia, which presuppose the provision of fire safety standards. Municipal authorities for most of the first half of the year delayed the consideration of project documentation and applications for construction permits due to the introduction of the new system. But even when the issuance of permits began, not all developers managed to adapt their projects to the new standards in the second half of 2017, which prevented them from obtaining permits. As a result, the number of permits issued was sharply reduced. Previously, the magazine International Investment has already made public the conclusions of experts that the introduction of new regulatory standards will lead to an increase in the cost of construction by an average of $ 60 per 1 m2, which can lead to a price increase in the primary market.

However, despite the decrease in the number of issued permits, the volume of construction in Batumi will not only decline but will more than double - by 101%. Thus, analysts conclude, the reduction in the number of building permits is not due to market conditions, but to the factor of state influence by introducing new regulatory norms. In the future, the effect of this factor is not expected. It is also noted that, despite the influence of regulatory norms, the area of expected development has increased. This gives grounds to believe that if it were not for the influence of the new regulation, then the level of its growth would be even higher.

A comparative analysis of the objects whose construction permits were issued in 2016 and 2017 shows that the construction market in Batumi demonstrates record growth rates.

Comparison of permits issued for construction in Batumi in the second half of 2016/2017:

A visual comparison of the results by the number of issued permits is as follows: © internationalinvestment.biz 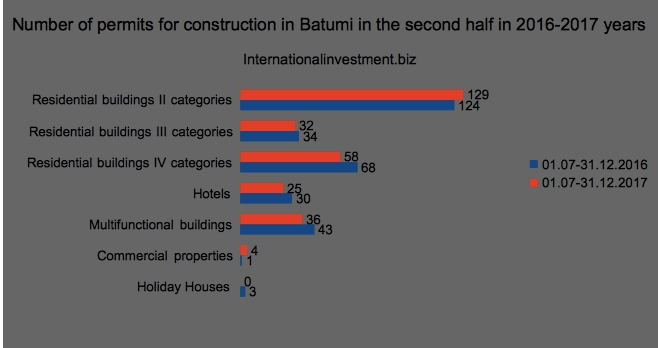 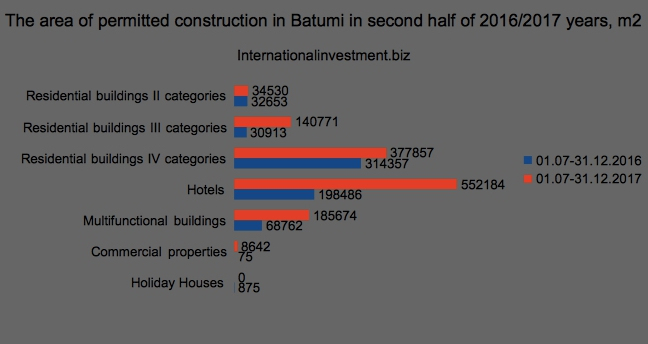 As can be seen from the diagrams given, the number of houses for holidaymakers was reduced, which, incidentally, was an insignificant indicator before. The area of commercial properties (+ 8567 m2), small multi-apartment houses of the 3rd category (+109858 or 355%), houses of the 2nd category, i.e. as a rule, private houses (+1877 m2 or 6%)

Reducing the area of construction of houses for tourists is more than compensated by the growth in the area of hotels, which increases by a record 178% or 353698 m2.

This statistics indicate a decrease in the role of small operators in the construction market of Batumi and the growth of the role of large developers who are able to implement larger projects and thereby bring to the real estate market cheaper projects or projects with more developed infrastructure.

The same goes for the construction of hotels and apart-hotels.

In the second half of 2016, the construction of 30 hotels (including apart-hotels) was authorized, with a total area of 198 486 m2. The average area of a hotel or apartment hotel was 6616 m2. In the second half of 2017, their number was reduced to 25, and the area increased to 552 184 m2, which increased the average area to 22 087 m2. The index according to which the average area of the hotel is several times greater than the area of residential apartment buildings is natural, given that most large developers prefer to classify their projects as apart-hotels, since this category legally has VAT privileges in Georgia.

This trend, according to analysts of International Investment, allows you to confirm the change of some trends in the real estate market of Batumi.

If the distribution of market shares between individual types of construction projects in 2016 looked like this: 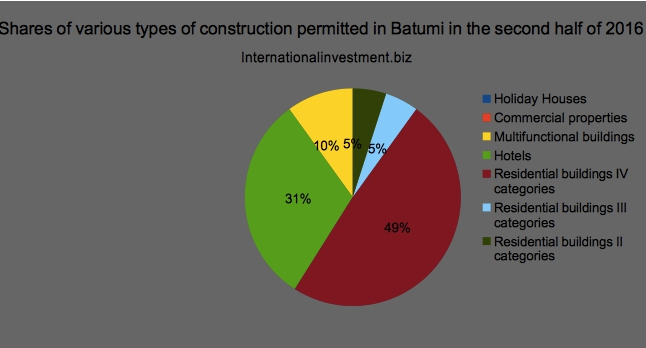 In the second half of 2017, the role of private house construction fell from 5% to 3%. The share of construction of residential buildings of the third category increased from 5% to 11%. The construction of hotels and apar-thotels has grown from 31% to 42%. The share of residential houses of the 4th category fell from 49% to 29%. At the same time, despite the growth in the area of multifunctional buildings, their share in percentage terms has grown by not much - by 4%. 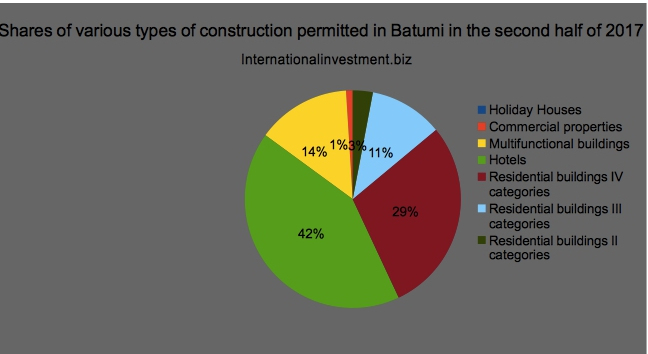 Analysts of International Investment indicate that the figures reflect only the forecast of market development in 2018-2019, which will cover the main stages of the implementation of projects authorized for construction. The inevitable adjustments will be made by the situation associated with their practical implementation, however, according to experts, this is unlikely to change the trends themselves. At the same time, it is not excluded that some developers who could not obtain permission to build small objects in 2017 will be able to do this in 2018, thereby partially winning back their positions. However, against the backdrop of the growth in the importance of large-scale projects, this is unlikely to change the market trends.

At the same time, the record growth in construction in Batumi creates risks of a significant prevalence of supply over demand in the real estate market, which can create a liquidity crisis. Despite the fact that the number of transactions in the real estate market in Georgia is also growing at a record pace, the growth of construction is ahead of the growth in the number of transactions. In addition, the growth in demand in Georgia, including Batumi, is not supported either by the country's own economic growth or by a sufficient influx of tourists interested in buying resort real estate. The growth of tourism in Georgia amounted to 18,8% in 2017, which is a high indicator. However, it is not high enough to provide buyers and tenants in hotel rooms and apartments, the level of construction of which will more than double. So, according to experts, the growth of construction will put pressure on the market for renting real estate in Batumi and will force landlords, by virtue of increasing competition, to reduce rental rates. Also, in two or three years, in the risk zone of the liquidity crisis, there may be both apartment owners trying to sell them on the secondary market, as well as the developers themselves. However, this risk, according to analysts, will not affect property owners in the first coastal line and villa owners in the resort area, as in this segment of the large growth in supply is not expected due to the limited number of coastal land.