How to overcome stagnation and develop the economy during the global crisis: the lessons of Georgia

Economic growth and infrastructure development: what conditions are created in Batumi for business, investors, residents and guests of the city

Mayor of Batumi Archil Chikovani: our goal is to create the most favorable conditions for investors and citizens

Mirian Metreveli: tourists in Batumi will get a more upscale vacation, and real estate buyers will have confidence in the future The political crisis of recent months has directly or indirectly affected many states of the world. In times of high-profile political slogans and economic difficulties, Georgia continues to choose the path of creating the most comfortable conditions for business. Today this small state attracts investors from all over the world. Thanks to this interest, cash flows to the country have intensified. Georgia has now received a powerful impetus to accelerate economic growth.

The balanced political position of Georgia makes it a mecca for investors and expats from various countries - people come here to live from Russia, Ukraine, Belarus, Europe, the Gulf countries, Israel, Canada and America. The country has become an area of peace and tranquility of European content.

Georgia, one of the few in the post-Soviet space, was able to become an investment-attractive country back in the 2000s with the help of unprecedented reforms, tax cuts, and the creation of special conditions for business.

“The level of development of democracy and freedoms in Georgia is one of the highest in Eastern Europe. Compare Georgia's place in international rankings and just look at the news feeds of our country and compare with others. This is also very important for understanding the level of business investment protection.”

David Chkonia, co-founder and director of the Legal Consulting Center

The tax burden in Georgia is one of the lowest in Europe. Individuals pay only one tax - income tax 20%. This makes the tax system simple, understandable and clear. The VAT rate here is 18%. For companies there is a 15% income tax. When receiving dividends, an individual pays a tax of 5%, and when reselling real estate - 5% of the profit, if less than 2 years have passed since the purchase. If more has passed, then it is exempt from taxes.

There are taxes, but later

Payment of income tax is deferred for businesses in Georgia. That is, if the company does not pay out the profit received during the year to its beneficiaries as dividends, but reinvests it in further business, then there is no need to pay tax. Liabilities under it will become relevant only if profits are withdrawn from the company.

Raising taxes in the country can only be the decision of a popular referendum, this rule is spelled out in the Constitution. And such a measure reduces the risks of changing the taxation system to a minimum. It is highly unlikely that the majority of the country's population will vote in favor of raising tax rates or introducing new taxes. Which, of course, gives confidence in the investment climate.

Public services have high standards that allow you to open a company or individual entrepreneur in Georgia in one day, register a property in one day, coordinate an architectural project in a month and obtain a building permit. Most of the controlling and auditing organizations were liquidated more than fifteen years ago, which reduced corruption to zero and created the necessary conditions for business development.

According to those who have already encountered bureaucratic procedures, here the entire state system is designed for support, “it is with you, not against you”:

“I am not sure there is such a word, but “sympathetic” would fit. Or empathy. At first you sit with an absolute lack of understanding of what to do and the fear of making a mistake, and then you relax, because the employees prompt, help".

Klim Chernyshev, opened an individual entrepreneur in Georgia in the direction of "software development"

Special conditions for IT

Preferential taxation conditions are available in Georgia for IT companies. Having the status of "Virtual Zone Companies" they are exempt from taxes for 1 year. Also, they do not have export duties on software exported from the customs territory of Georgia. And all costs associated with exporting software outside or within Georgia are deducted from the company's gross income. Companies operating in the virtual zone in Georgia do not need licenses, permits or regulations. The validity period of the "Virtual Zone Company" certificate can be renewed annually.

According to experts, now IT specialists are relocating to Georgia, leaving their countries for economic, political reasons or due to hostilities. Many companies have moved their business to this country in whole or in separate departments. The growth in the number of IT companies and specialists will stimulate the development of this industry in the country. Perhaps Georgia will soon have its own “silicon valley”.

Free trade with the EU

Business in the country is also attracted by the opportunity to take advantage of the agreement between Georgia and the EU on the "Deep and Comprehensive Free Trade Area" (2014), which allows duty-free export of products to European markets. Also, free trade agreements have been concluded with China, Hong Kong, the CIS and Turkey, with the USA, Canada, Japan, Norway and Switzerland. An agreement with Israel and India is under consideration.

Thanks to these advantages, various types of business are actively developing in Georgia, including construction. In recent years, premium and elite level objects have appeared in the country, including closed residential complexes with a European level of quality, service and a guaranteed income of 8% per annum prescribed in the sales contract. The capitalization of exclusive properties is 20% per year due to the shortage of this segment in the market and high demand among the establishments from different countries. These are unprecedented rates of return compared to similar properties in European countries with a jaded market and high taxes.

"Georgian Post" took the first place among the postal operators of the world in the delivery of humanitarian aid to Ukraine. With its help, as of April 1,400 tons were sent. This is more than sent by the post of any other country. Georgia has also become one of 14 countries that allow individuals and legal entities to send parcels to recipients in Ukraine for free.

At the same time, Georgia remains neutral and has repeatedly stated that it will not impose sanctions against Russia. This was stated by Prime Minister Irakli Garibashvili.

“I want to clarify again. There will be no economic sanctions imposed by Georgia on Russia. We, our team, proceed from the national interests of our country, from the interests of our people. Our policy is peace oriented. We want peace, stability and development. This is what our country needs today, no one needs war. Any patriotic ruler must do everything to avoid war."

Thanks to its balanced position, Georgia is becoming popular among expats from Russia, Ukraine, Belarus, Europe, the Gulf countries, even Canada and America. In fact, now Georgia has taken on a role similar to that of Switzerland during the Second World War - an oasis of peace and tranquility in a blazing Europe.

Georgia constantly emphasizes its commitment to European values ​​and is little dependent on Russian exports and imports - in 2021, Russia accounted for 14.4% of Georgia's exports and 10.2% of imports. At the same time, unlike many European countries, Georgia buys gas from Azerbaijan, and not from Russia. The country also has a transit corridor through which 1.6% of the world's oil and gas transit passes.

Most foreigners can freely enter Georgia and stay in the country 365 days a year without obtaining a residence permit or any other documents. You don't even need to register at the place of residence. When 365 days expire, you can simply cross the border with any other state and enter again on the same day. You can work in the country without special permits. And the purchase of real estate worth more than 100 thousand dollars gives the right to obtain a residence permit. After 7 years of residence on a residence permit, you can obtain citizenship, but you will have to pass an exam for knowledge of the language. But Georgian citizenship gives the right to visa-free entry to EU countries. 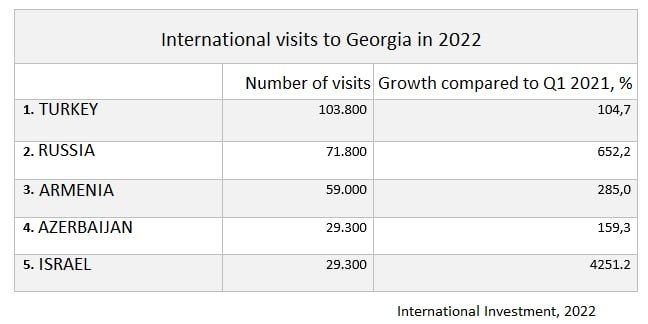 The influx of foreigners into the country stirred up rental prices - growth in the first quarter of 2022 has already amounted to 50%, and this trend, according to experts, will continue. Foreigners from different parts of the world increase the number of qualified personnel in the labor market with experience in international companies. Such "fresh blood" has a positive effect on the quality of service and business development in the country, new companies are opening, the number of jobs is increasing, and the inflow of investments into the country is growing.

The economy grows despite restrictions and challenges

Most of the investments are from large investors, their share in total FDI amounted to 69.8%. The top 5 countries by FDI looks like this:

Real GDP growth in Georgia in January amounted to 18%, in February 2022 - 14.6% compared to the same period of the previous year, according to the Statistics Department of Georgia. And the average GDP growth rate for January-February 2022 was 16.3%. Economic resilience was also underlined by double-digit real GDP growth of 10.6% in 2021 as the economy then outperformed 2019 levels by 3.2% despite the challenges caused by the pandemic.
According to the government's economic program, the authorities are going to move to an aggressive policy of attracting foreign investment and re-positioning the country for foreign investors. In particular, they plan to adopt a new Law on Entrepreneurs, reflecting the requirements of EU regulations. This will bring Georgian corporate law closer to EU legislation.

According to experts from International Investment, the above benefits and dividends from them are the result of a well-adjusted course of the state to attract investors to the region. The authorities have been successfully adhering to this course for more than 10 years. Given the tightening of restrictions due to the next political crisis in Europe, the tightening of migration laws, financial audits and taxation, Georgia is becoming one of the most interesting financial hubs in the region. And political neutrality makes the region safe and interesting for investors.
Поделиться в Facebook